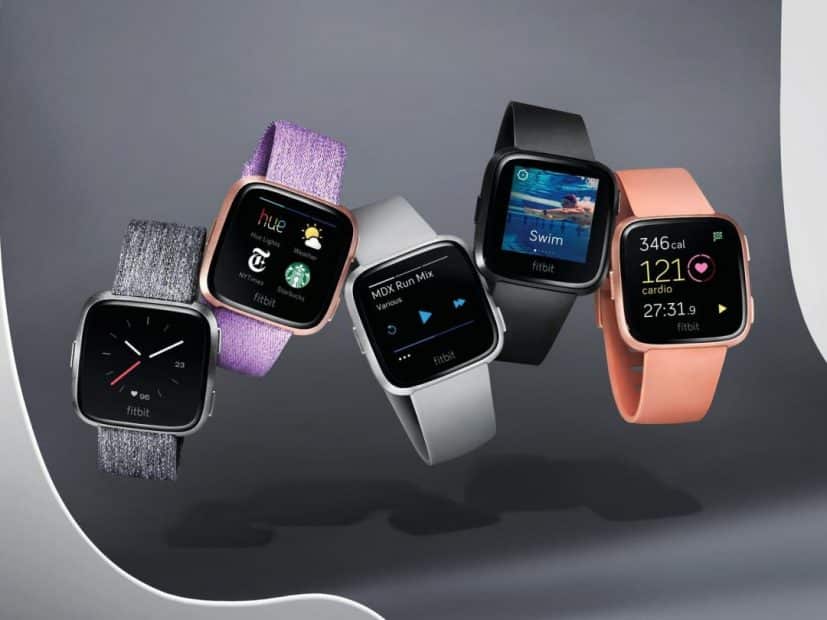 The Fitbit Versa smartwatch really felt like a mix between the Pebble, Apple watch and Fitbit Blaze. It looks great on the wrist, but it’s not designed in Cognito.

The front screen is made up of Gorilla Glass 3 which helps protect against scratches, dings, and drops. Although the last model of the ionic was also created with this Gorilla Glass 3 it seems as though there’s a little bit of an upgrade in the glass used with the Versa. In that first week with the ionic, we ended up with a huge scratch across the front base.

With the Fitbit Versa, We’ve dropped the Fitbit watch from five to six feet elevations, roughed it through Catholic strips with no scratches whatsoever. This was a pretty big boost from the last model.

We have the anodized casing for increased durability. Versa smartwatch also has the same peer pulse sensor that is in the attic.

Unfortunately, you can’t pair to an external heart rate sensor. However, comparing the Fitbit Versa to something like the Garmin heart chest monitor, the average heart rate per session is fairly accurate.

And finally, the buttons do give some great feedback so you can feel exactly what you’re doing with the Fitbit watch.

The Fitbit versa is also water resistant for up to 50 meters for 30 minutes and tracks swimming statistics pretty well in terms of lapse and distance. Fitbit Versa is at least better than the Fitbit Ionic. Now you can get better data while tracking in the water.

The front display has a sleep option, which helps saves battery. However, this means you’ll be expected to tap, click on the buttons or turn your wrist just to seeing the time or your notifications.

This can sometimes be annoying to keep having to tap your watch or to turn your wrist every time you want to see the time.

You can also connect your Fitbit Versa to a Bluetooth 4.1 device similar to the Ionic as well as upload up to 300 songs on the go listening without your phone. Just make sure you allocate plenty of time for the upload as this is probably one of the biggest pain points of the Fitbit smartwatch.

Battery life with some testing proved to last the claimed four days with a ton of usage, however, this will decrease with increased usage apps and setting configurations.

With the view checks on stats and max brightness and auto screen awake on, we were able to get a solid 3.5 days consistently from the Fitbit Versa.

The charger, as with the Ionic is distinct, which does bring up the hassle of having to bring along another charger with you on trips. However, we did enjoy this charger a lot more than the Ionic due to secure protective nature of the Fitbit Versa charger.

It really locks it into place.  In total, the Versa charge time took about two hours to fully charge from 0%.

Although, the Versa smartwatch is one of the better fitness trackers on the market, the OS itself is rather behind the time. Maybe almost like an old Android OS.

The Fibit Versa runs off the Fitbit OS, which if you have had the Ionic, you should be familiar with. Overall, the Versa is a runoff of an Android OS system. However, compared to some of the other watches, like Apple watch 3 or Samsung gear 3, you’ll be able to notice that the Fitbit OS runs a little slow.

Though the latest updates significantly increased the OS performance in our opinion. This being said, Fitbit seems to understand that, that this is a fault of the OS continues to release patches that help the overall performance of the firmware.

How to Setup Fitbit Versa with Smartphone?

Set up is quick and easy with the Fitbit Versa as well. All you need to do is go to your mobile phones, native app store and download the Fitbit app. Once you do so, you’ll be able to create a new Fitbit account or log in with a previous one that you’ve already created.

Once you do so, you can select your new device, which is the Fitbit Versa, connect it with your phone via Bluetooth, connect to your Wi-Fi, wait for the updates to download and install. Select your quick configurations and settings. And you’re ready to go. Fitbit Versa is compatible with Android and iOS.

The Versa smartwatch is really great for any mobile user. The Fitbit mobile app continues to be a great all in one hub for your fitness community and stats. Not only do you have access to a network of great health oriented individuals like yourself, but you also get a single place for all of your stats from distance step to calories burned, sleeps activities track and more.

During our testing, Fitbit Versa didn’t track reps when weight lifting though it did track heart rate compared to other options such as the Apple watch 3, the fact that you don’t have to log into three different apps to see exactly what your stats are.

This is a huge convenient time-saver alone. In the community section, you can also join groups with common interests such as running, yoga, et cetera, to find a ton of motivation to get you active. You can also add friends and compare stats with each other. This is a great tool for those that are competitive.

And finally, you can fully customize your stats dashboard to have a display what you want, wherever you want. In addition to, you can customize your notifications, auto tracking configurations and preferences to your Fitbit watch. You can also set quick replies, which is an update from the last Fitbit release of the smartwatch.

They didn’t have this feature in super handy because you can select “By application” and select “emojis” as well as quick responses. Downloading applications happens inside the mobile application as well. Although the app store is constantly being updated with new applications, it is still minuscule compared to Samsung’s app store or Apple’s app store.

Fitbit App store has grown significantly, not only in application numbers, but also in a watch face numbers with overall 500 watch faces from private developers as well as Fitbit.

Effort Quick tip for the Fitbit Versa, you can actually change your quick start button apps just holding an application until the Versa responds with a vibration and shifting it all over to the left.

How to Change Fitbit Versa Bands?

You can change out the watch bands quickly by using the little notches on the bands themselves. They are loaded with a spring triggers so that way you can just push in the little knob to contract the latch and the spring and load in your watch band to the watch face.

Once it’s in place, you can let go of the little latch and then the inner spring will push out the rod to lock the watch band to the face.

This is a little bit different than the Ionic where it had the quick release buttons, but it still does the job and it holds the watch band securely in plate.

There are many different Fitbit watch bands. You don’t necessarily have to go with Fitbit. However, in our experience, Fitbit does have the best watch bands.

Overall, if you’re someone who casually works out and is looking for an activity tracker, you won’t be disappointed with the Fitbit versa.

However, this is definitely more of an activity tracker than an actual smartwatch with its sleek, thin and compact design that Fitbit Versa definitely packs quite the punch in terms of fitness functionality.