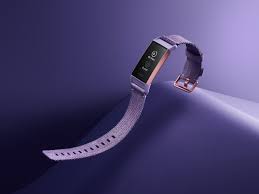 If you just take a quick glance at Fitbit Charge 3, it looks basically the same as the Fitbit Charge 2. Fitbit Charge 3 still has a unisex design. It’s still pretty lightweight and has interchangeable bands. It’s only a little bit more angular, and I think Fitbit Charge 3 feels more premium, like it has an aluminium finish.

They got rid of the physical button in place; a kind of subtle touch capacitive button that I actually quite like. The Fitbit Charge 3 bands feel more substantial now and perhaps even a little bit softer, but the Fitbit Charge 2 bands will not work with the Fitbit Charge 3, so you have to buy the compatible ones.

Fitbit of course sells them, or you can buy like third party bands. There’s a lot of people that make affordable Fitbit Charge 3 bands. Now, Fitbit Charge 3 has a grey scale display as opposed to a pure black and white display. There’s no upside or downside really to that.

Fitbit Charge 3 also is now slightly larger, so it’s like 40% larger than what we saw on the Fitbit Charge 2 and it is a full blown touchscreen as opposed to a tap screen. Now, when I first saw this announced, I was a little bit nervous because using a touchscreen is harder, like to swipe through things when you’re running or working out.

It requires more accuracy when you try and swipe through. Then if you just tap, but it looks like Fitbit knew about this because when you’re doing a workout, it actually becomes a tap screen, so you tap through to see all of your stats. So it’s a touch screen for most of the time. And then a tap screen during workouts.

The Fitbit Charge 3 is now water resistant up to 50 meters. And the prior models, it was just water and sweat resistant. It also has a little bit better battery life. So Fitbit says up to seven days. For me, it was about almost a full six days on a single charge, but I was playing with it constantly fiddling with it, messing with it.

And so you’re probably going to get a little bit better battery life than me because you’re not just there sitting all the time playing around with it.

Now, the one thing that I don’t like regarding the design, and there’s probably nothing Fitbit can do, is that Fitbit Charge 3 uses a proprietary charging cable, which means when you go on vacation or you go traveling, you have to remember yet another cable to bring with you in addition to your micro USB cables, your lightening cables or whatever.

So it’s just one other cable you need to bring with you. If you lose it, you got to buy another one. So I just wish it had some sort of standard charging cable, but we’ll probably never see that. So that’s the basic design stuff.

Is Fitbit Charge 3 Worth it?

But what can the Charge 3 actually do? So for $119 what are you getting out of the device?

It also kind of is a GPS watch. And it is kind of a smartwatch.  Now the Fitbit Charge 3 will track your daily steps, your calories, your distance floors climbed, your heart rate and your sleep.

It also has alarm and a stopwatch, and I kind of always have to say this, but remember, this is just an estimate of your daily stats.

It’s not going to be perfectly accurate. I have found the sleep tracker to be better than the ones that you’ll see on Garmin and other devices, so that’s good. And I do think steps, calories, distance. It’s pretty good. Again, it’s not going to be spot on, but I think for most people it’s just fine.

It’s all about tracking your behavior and keeping you accountable. Now, they also have a daily goal for you that can be steps, calories, whatever you want it to be. You set that goal and Fitbit Charge 3 tries to keep your feet to the fire and they have an hourly goal. This is one of my favorite things about Fitbit devices.

Fitbit Charge 3 gives you a goal every single hour for steps, so every hour you need to get up and move. And I like that instead of just making it an alarm to tell you.

It’s really nice. Now, in addition to that, Fitbit Charge 3 will monitor all of your workouts like you’ve seen in other devices and all that information will end up in the Fitbit app.

So you have two options here. One, you can set the workouts that you want to be on the device that’ll be like running or biking and so on.

Or you can just do that activity and let it automatically track it via what they call SmartTrack. I prefer the first way because it’s guaranteed that it’s going to track it, but they also have that auto track feature.

Now for anything that requires GPS, like if you want to map it, like running, hiking, biking, walking. There’s good news and there’s bad news. The good news is it still has connected GPS. The bad news is that Fitbit Charge 3 doesn’t physically have a GPS chip.

So in order to map a run or to get your accurate pace or distance information, you have to bring your phone with you on that run. So what it going to do is it’s going to piggy back off of the GPS from your phone.

You know, it’ll be accurate. It’s just a pain because you need to bring another device with you on your run. You can’t just leave it behind. I still think most people run with their phones or go biking with their phones. So it’s probably not a big deal.

But one thing that is a big deal is that the Fitbit Charge 3 has swim tracker.

So just like the ionic, the versa, the flex 2, Fitbit Charge 3 can monitor your swimming workouts. So what it does is it tracks how long you swam, the distance you swam, your calories, and your pace. It’s not going to have as much information as a Garmin device. Fitbit Charge 3 is going to be good for most people if you just swim casually.

But when you get into CrossFit or weight training, it’s just not made for that, almost all wrist heart rate, sensors breakdown during these activities. So just know when you see the max and the average heart rate at the end of some crazy weight training workouts, those will probably be okay.

But the like minute to minute heart rate usually isn’t going to be perfect. It will snap back quickly. But it’s not made for weight training or CrossFit.

Unfortunately, I wish they would do that, but they just don’t do that.

Fitbit Charge 3 As A Complete Smartwatch

Now, before I said it’s kind of a smartwatch, so let’s go over those features. It’s basically has three things. One, it’s going to relay the incoming notifications from your phone, assuming your phone is within Bluetooth range. That’ll be things like calendar reminders, text messages, phone calls, even certain apps like Gmail.

You can just go in the Fitbit app and you can select which ones you want to be relayed onto your wrist. It works fine. The second thing is in the future, there will be more apps that are made for the device that you can download onto it. As of now, I’ve only seen a weather app which works fine. I like the weather app.

It’s great, but there are no really other apps from third parties that are created for this device. The one caveat to that is that if you get the Fitbit Charge 3 Special Edition, which costs more naturally, it comes with a Fitbit pay, so you can pay for goods and services directly from your wrist.

Fitbit Charge 3 is basically the same thing as the Charge 2 with some things added on. Obviously the biggest two new features are a bump to battery life and the swimming stuff.

I don’t think it’s going to be worth it for anybody that has the Fitbit Charge 2, unless your Charge 2 is tattered up or you really care about swimming, but if you’re going to get a new Fitbit device, you may as well get the latest, so it’s going to be really popular.