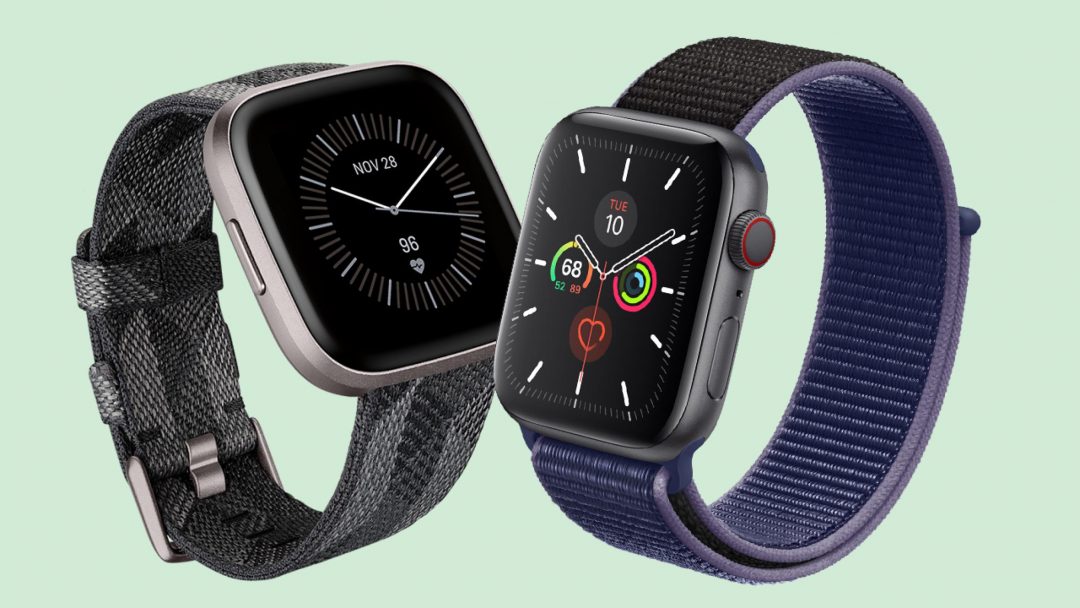 The Apple watch series 5 starts at $400 and comes with many features to help keep an eye on your health and fitness. The Fitbit Versa 2, on the other hand, stops at $200 and comes with many similar features. So let’s work out, if you need to spend more or less. I’m going to break down all of the differences between Apple Watch Series 5 and Fitbit Versa 2 and decide which one is right for you.

So let’s get started with the first main difference between them. That might automatically discount one or the other. The Apple watch series 5 only works with iOS, you probably knew that, but I know, I have to say it’s straight off the bat. The Fitbit versa 2 works with both iOS and Android.

A big reason why you get a smartwatch is not only for the smart features when connected to your phone, but also for fitness and step tracking.

I’ve used them separately, so I’ve got some good baseline results to compare each of them. Two on the same wrist, and I have to say the results from both has been fairly consistent. The heart rate has been pretty similar between the two. During a cardio based workout, I found that the calorie burn was perhaps a little different between the two, although that’s not a big important metric for me.

I was really interested in just seeing if both of them gave me a good baseline reading and yeah, for outdoor activities. They were both great. They both did a really good job. I really prefer the way that the Fitbit does heart rate tracking on the screen. It gives you a nice breakdown to show what zone you’re in, say, cardio peak or just general fat burn.

Whereas the Apple watch just gives you that beats per minute reading on the screen. The Fitbit Versa 2 has many goal-based exercises to help you keep an eye on things like your distance or your calorie burn. So it will let you know once you hit a set and target. The Apple watch has that as well, of course.

But when it comes to the types of activities that it can categorize, the Apple watch has a lot more including badminton, table, tennis, surfing, and my personal favorite curling. Another difference between these two watches is how you get an idea of how much exercise or activity that you’ve done every day.

The Apple watch uses the ring based system that it’s used ever since the first Apple watch with your move, exercise and stand rings, and the idea is essentially you want to close those rings every day. The Fitbit doesn’t have a similar visual system like that, although it does give you a list of metrics, say your steps.

And the total amount of exercise that you’ve done every day, and it does give you nudges along the way.

Let’s talk outdoor workouts and GPS, because for me, as someone who likes to do outdoor runs and bike rides, it’s a really important feature. Maybe it is for you too. So the Apple watch has GPS built in.

I have no way to put it. I don’t have a pocket when I have my workout gear on. It just becomes so frustrating, like fact that I have to take my phone with me is a real pain point, but maybe it doesn’t matter to you. It does to me.

On watch OS6 with the Apple watch, you can also get some trends to give you an idea of how much you’re progressing, well, how much activity you’ve done in a certain week or a month.

The Fitbit also offers that too within the app, and it also sends you a nice email digest usually on a weekly basis that gives you an idea of all the activity you’ve done that week.

For example, the Apple watch gives you full detection and the ability to call emergency services if it does detect a fault. It also has an FDA cleared ECG and high low or irregular heartbeat ratings and sound detection.

So it can give you an alert if the environment you’re in is noisy and may damage your hearing.

So let’s talk about how the Fitbit does it. It will break down how many hours of sleep you get and workout.

The stages of sleep you are in, such as REM, deep sleep or light sleep as well as your awake time. At the end of the night, it will give you a sleep score out of a hundred.

Sometimes I would get a full eight and a half hours sleep and I would feel great when I woke up. Yet the Fitbit Versa 2 would say, well, you only got a sleep score of like 68 and it didn’t give me any ways to kind of improve that or recommendations apart from say like going to bed on time, which wasn’t that helpful.

Both of these smartwatches have an always on display, although it is implemented in a slightly different way. So both of them have obviously Color displays, but when you put the always on, so it actually works like, you know, a normal watch, you can tell the time all the time that is done in a different way.

On the Fitbit versa 2, it is a black and white crowm always on. And the Apple watch is a color always on. I guess it’s kind of before my time, but I’m guessing the difference is kind of like when TV went from black and white to color. Alexa Versus Siri.

So, obviously the Apple watch uses Siri as its voice assistant, and you can say the command with your voice or press a button in order to trigger it.

With the Fitbit versa 2, you’ll need to actually press and hold the button to get Alexa to pop up.

Now on the back end on the Versa 2, you’ll have to log in on your phone and register with Alexa to get it to basically have control and access to things on your phone.

But it is sort of limited, so you won’t be able to do things like, say for example, and start a workout with your voice, like you can on the Apple watch. With Alexa, you can control smart devices, check the weather, set reminders et cetera.

However, the Versa two does not have a speaker on board, so you’ll be able to talk. It has a microphone, but you won’t be able to hear responses. You’ll just be able to see them on the screen. Whereas the Apple watch series 5 does have a microphone and speaker, so Siri can talk to you.

Both also get notifications from your phone and you can get pretty granular and customize what comes through.

However, you won’t be able to respond to text messages, for example, on the Versa 2, if you have it attached to an iPhone, you can on Android however.

The Apple watch obviously gives you full control in responding to text messages and things like that from an Apple watch to an iPhone, and both of them also let you accept and reject calls from the watch itself. And the versa 2 will even let you do that if you’re using an iPhone.

You can also put music on both of these watches, but it’s really a pain to do it on the Versa 2. You have to like go to your computer, install some software, drag the files across, and just wait in eternity for the music to be stored on your watch.

The Apple watch does it straight from the iPhone, so from your Apple music library, it can just be ported straight across.

You do get Spotify control on both, however, not storage. The versa 2 has a native Spotify app, but again, you can’t store any songs for offline listening. It’s just for control. Same on the Apple watch, but the Apple watch does offer you Apple music control as well as if you have LTE on the watch, you can listen to songs on the go without your phone.

And store them offline if you don’t have a connection, which is kind of nice.

When it comes to battery life, there is no question about it, the Fitbit Versa 2 absolutely blows the Apple Watch Series 5 out of the water. I got around five and a half days of constant use with notifications turned on without the always on display however, and that gave me a pretty good run.

The Versa 2 definitely feels faster and more responsive in the menus and interfaces than the first edition of the Versa, but when you put it side by side with the Apple watch, you definitely realize that this is an much faster watch with a much stronger processor. That just feels so much more fluid and things activate much faster too.

So I think if you’re looking for the most responsive watch, it is going to be the Apple watch.

The Versa 2 has connected GPS and Wi-Fi. The Apple watch has GPS with an LTE option extra.

So now it comes to the time where I have to set my feelings and find the winner, decide which one I would buy if I was spending my own money on one of these watches.

This is always a tough decision. I say this every single time, and I am really struggling with this decision because $400 versus $200 I’m a cheapskate.

$200 sounds amazing, but. I think I’m going to choose the Apple watch series 5 just because it does so much more. It has the options of extra health tracking features plus all of the fitness tracking and the notifications. You can do a lot more, but only if you’re tied into the iPhone.

If you’re an Android user, then Fitbit versa 2 is going to be an excellent buy. I really, really like using it honestly; the battery life kills the Apple watch. So for that reason to learn, it’s like it’s really, really easy to recommend the Fitbit Versa 2 and I’m going to be sad when I have to send it back to be honest.

Here is an extra thought for you. Maybe you want an Apple watch, but you don’t want to spend that much money. So Apple has recently reduced the price of the series 3 to $200 which is the same price as this guy. So maybe that’s another option. And if you install Watch OS6 on it, which you probably should, you get a lot of the same features that I spoke about on the series 5 except for that health detection, ECG, et cetera.