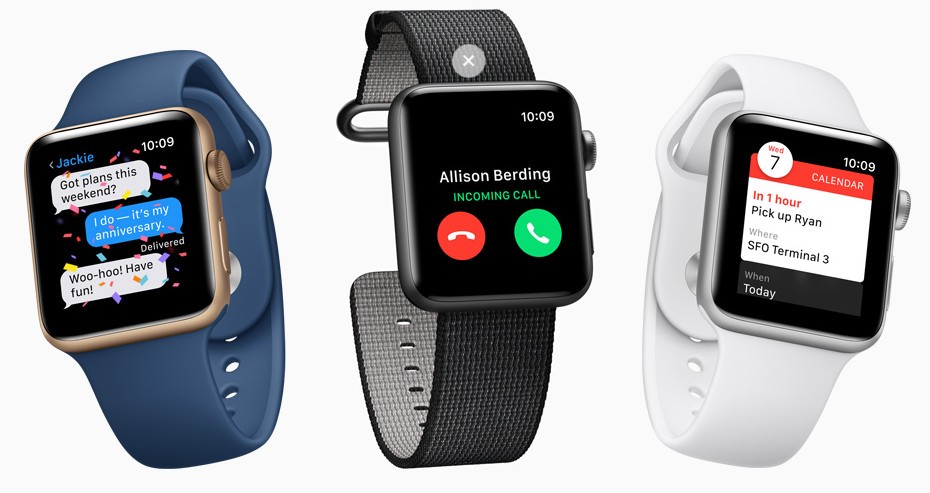 Apple watch series 2 started $179 that’s actually for the first generation model. The cheapest second generation is priced at $160 for the smaller 38 millimetre size. I did personally purchase the 42 millimeter apple watch, and that comes with this silicone band.

And a silicone band is a must if you’re a fitness nut or intend to swim with 42mm space gray aluminum Apple watch series 2 on as well. And yes, that’s one of the newest features. You can get up to 50 meters or 164 feet underwater. And unlike the first generation apple watch, it was only splash resistance.

But like the previous pink sand sport band , Apple graciously offers institutional bands. It’s very straightforward to swap them out. Simply hold the release button on the back, slide the old mouth and slip the new one back on. I recommend getting the base model if you do decide to do any sport activities, plants sweating in this thing, and then purchasing from third party vendors where you get different styles for cheaper versus purchasing direct from the Apple store.

I had zero problems whatsoever. There’s built in GPS, which I recommend for any fitness watch as it does provide much more accurate results. And with my testing running at my very familiar park, it’s as accurate as my phone’s GPS. And as accurate as my other GPS smart and fitness watches. I’ll get into detail about running and working out pretty shortly.

Now, one of the features I absolutely love is answering phone calls right on your wrist. Technically, this is a new, I’ve seen this on a Sony smartwatch but other smartwatches, if they offer this feature, they usually have to get a separate data plan for the watch itself.

Now with the Apple watch series 2 your piggybacks right off of your phone. On the positive side, if you are in a silent room, a silent area, it works perfectly for my test and with my friend on the other side, she says that I sound very clear. There is some distance though, but other than that, that’s very common with most speakerphones.

If you’re in a slightly busy area, there’s a background noise. It’s somewhat hard to hear your friend and you’re then placing your smartwatch next to your ear trying to have a listen. But it does work though, it’s such a handy feature, especially if your phone is in your pockets or maybe you’re away from your phone in general.

Now, notifications come through perfectly with options to respond back to text message on the go. Quick responses are provided at the bottom of the screen. Or voice recognition. It works very well, and it’s possibly the fastest method here. Uh, basically if you want to do some full on sentences to respond, uh, scribbling is also an option available on Apple watch series 2.

Surprisingly, it does work very well here, but I do wish my finger recognition could be more exact. I feel as though I have to exaggerate or perfect each letter at times to ensure the Apple watch registers that particular letter I’m trying to type in, but overall, all the options available has been good.

Not to mention emojis are also available in series 2 apple smartwatch. One of the best features is the option of having the homescreen change without needing to download or access through the app on your phone. That is that you can indeed download more backgrounds, but having several pre-installed on a watch already make it streamlined.

Now swiping left and right, it’s pretty simple to do, once in a while, I don’t perform that perfect edge swipe, so the Apple watch isn’t too forgiving, but understandably so, I’m sure to prevent accidental screen changes. Now pressing the crown down the side brings up all of your apps, which works great here and something that would be great to see an iPhones and iPads eventually as an alternative instead of swiping and flipping through your screens along.

That same dot brings up Siri, which works great when you want to use a voice command. Now, the bottom below that, below the crown allows you to close apps or select which ones to bring forth that are already open. I was speaking of apps for those who are unfamiliar. Apple does have a great line-up of third party app vendors.

All of my social media or on their lights, what are Instagram, et cetera. All of my most used fitness apps like Runkeeper and Strava are there as well, and you can initiate a workout right on your wrist. Now there are apps, weirdo apps, I guess you can say down to like Zillow and Redfin. Those are on there because I’ve been, you know, searching for some new homes recently.

But again, that’s some of the variety that is offered at the end. A very robust lineup of apps, and I’m sure most average consumers, Ever users, will find something worthwhile to them on there.

As for the fitness side of things, the daily activity tracking is very good, but I believe very much for the average consumer, everything fitness related that the Apple watch offers is technically offered by the likes of Fitbit and other mainstream fitness bands out there.

As indicated in this pink color, the greenest were exercise and less that aquaculture here in the middle is how much you have in standing for no steps in the distance are still counted. But again, the main focus is on the easy to read activity wheel and how much activity in general that you have performed.

Now, when you do an activity or log in or run here, it does get quite interesting. GPS kicks on the heart rate sensor starts reading and at your fingertips you have distance, pace, heart rates, and a timer going all at the same time in Apple watch series 2. Just enough to see how you are performing or during your run is just enough data, at least for me to ensure I’m performing.

It’s somewhat of a bummer, so long term trends for more fitness focused individuals who likes data and numbers. The fact that app isn’t ideal, but in a big buck, that doesn’t mean the Apple watch is any less as you can use third party apps, like the very popular Runkeeper to track those needs. Now as for our heart rate accuracy, I’ve proven through two years or so, possibly three years of testing these things on my Apple watch series 2.

Most risk-based heart rate trackers are not as accurate as chest straps with the Apple watch series 2 it does a very good job at reading the very peaks and the very low. But the consistency throughout the run isn’t dynamic or as responsive as I’ve seen at the chest strap, and you can see the blue or somewhat purple line is very blocky.

Now, this could be due to noise when running and I tried to ensure the best fit in placement per instructions each time, but every one I’m doing. I’m getting these results, but sometimes it’s spot on at time that’s completely off. In the end, i would say Apple watch series 2 is still a worthy heart rate tracker for general readings.

The readings are accurate enough, but if you’re looking for a pinpoint accuracy, it’s not there. With the variability, i would say the readings performed as well as most other heart rate trackers out there. It was an average performance, you can say. So coming to the end, one of the biggest gimmick in the last generation was bettery life lasting only 18 hours, maybe 20 hours or so from some people.

Now, from my experience, i don’t know if this is a gimmick of one of those under promise and over deliver situations. I’ve actually been getting a day and a half and on days I’m not using it too much. I can get two full days’ worth of use and with a run in with text messaging pure radically throughout the day, and of course checking the time.

Once in a while I’m going to average well over 18 hours that Apple is claiming.

Now, to conclude an answering the question, what’s new in the series 2 apple watch versus the last generation and should you upgrade. There’s a new faster processor. I don’t know how much faster it is, but my series 2 has been buttery, smooth, to be honest with you. And now Apple watch series 2 features GPS. It’s now water resistant up to 50 meters, not just splash resistance.

Read: How to Get Apple Watch Faces Rolex?

The screen is crazy bright, possibly one of the best sreens, indirect sunlight that have tested so far in any smartwatch. That is one thing I forgot to mention though. There’s also media controls on Apple watch series 2. Better get, and you can store music on the Apple watch itself through Apple music and leave your phone completely in the car or maybe in your locker and you can listen to your music with Bluetooth earphones.

Now, the overall experience has been really good and features nearly everything we want on a smartwatch. The flaws that I did notice though, were equivalent to the other flaws that I’ve seen in other devices. So the Apple watch, it’s technically not worse than others if you’re on the fence for an Apple watch.

I’d say it’s surely worth the purchase. It compliments your iPhone very much. So that’s it for this review. Be sure to like and comment if you haven’t done so already.