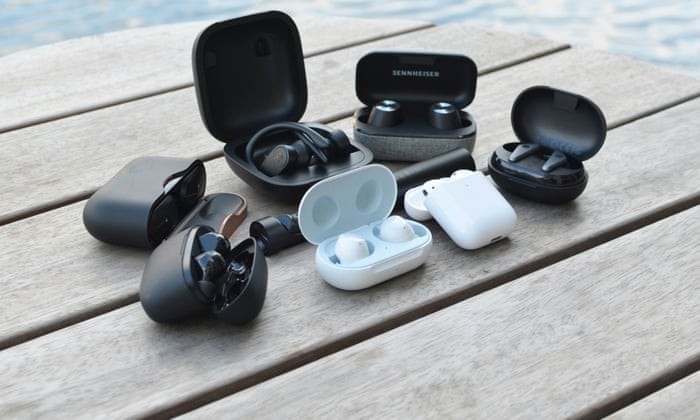 We’ve got Apple’s incredibly popular AirPods Pro for $234, Sony’s WF-1000XM3 that are known for having the best noise cancellation on sale for $179 and Samsung’s brand new Galaxy Buds Plus for $143 quite a bit cheaper than the other two options.

So without further ado, let’s get right into comparing these earbuds in a bunch of different categories, starting with the size and portability of the cases.

The case on the Galaxy Buds plus is the smallest in terms of height and length, but it’s thicker than the AirPods pro case. The case on the Sony’s WF-1000XM3, however, it’s pretty massive compared to the other two, so it was definitely not as easy to carry around.

In terms of weight, the Sony’s WF-1000XM3 are over twice as heavy as the galaxy buds with the AirPods pro falling somewhere right in the middle. So, that’s a nice bonus for the Samsung earbuds.

Design: Galaxy Buds Plus VS Airpods Pro VS WF-1000XM3

For design and build quality, the Sony’s and the AirPods pro feel really nice, solid in premium. On other hand, the Galaxy Buds plus, however, feel a bit cheaper, which they are.

Of course, in terms of the quality of the hinge, the AirPods pro have a very solid middle hinge that feels really nice to flick open. And the magnet, the holes, the top down seems to be stronger than on the other two.

Both the galaxy buds and the Sony’s WF-1000XM3 have plastic hinges that aren’t as solid with the hinge on the buds, plus fueling a bit wobbly and not as secure in terms of how much battery is packed into the cases themselves.

Excluding the earbuds, the Airpods pro case holds enough power to give you 19 more hours of listening with noise cancellation on. Well, the Sony’s give you 18 hours, which doesn’t really make sense considering the massive size difference between the cases. This shows that the Airpods Pro are more efficient.

Now, on the other hand, the case on the galaxy buds packs an extra 11 hours of listening time, even without noise cancellation. The nice thing about the AirPods pro and the galaxy buds plus is that the cases feature wireless charging while the Sony WF-1000XM3 doesn’t. However, the AirPods case uses a lightening port for charging, which is a bit disappointing compared to USBC on the other two cases.

Now opening them up, we noticed that it was a bit hard to take the earbuds in and out of the case on the Sony’s compared to the other two. And the Airpods pro have a really satisfying snap when you put them into the case because of the more powerful magnets.

Now before we get into comparing the audio quality between these wireless earbuds. Let’s compare some of the fine details of the earbuds themselves. The Airpods pro have a very sleek, low profile shape with the short STEM sticking out for better microphone quality. The Sony’s are quite a bit larger than the other two in terms of total mass and the galaxy buds lack any kind of STEM in terms of the weight of the earbuds themselves.

The Airpods pro are the lightest with the Sony’s being over 50% heavier. And in terms of the design, they honestly all look really nice and clean with the galaxy buds plus being the most subtle, lacking any kind of STEM or logo. The really nice thing about them is that they’re flush with your ear so you can freely change your shirt without having to take them out.

The Sony’s WF-1000XM3 honestly look really professional. While the AirPods pro have a unique look and shape that some don’t like. But you definitely won’t mistake them for any other pair of earbuds.

Battery Life: Galaxy Buds Plus VS Airpods Pro VS WF-1000XM3

Now, comparing the battery life of the earbuds themselves, the AirPods pro are rated for four and a half hours with noise cancellation on and five hours with it off.

Now, in terms of comfort in the ears, the AirPods pro are by far the most comfortable out of the bunch, and there are two very good reasons for it.

Well, both the Sony’s and galaxy buds plus have a hard plastic tube that enters your ear canal with the Sony’s being thicker, the Airpods pro speaker is actually flush with the body, so the only thing that goes into your ear canal is the silicone ear tip. On top of that, all of those earbuds create a seal inside of your ears for better bass and sound quality.

But the AirPods pro have an innovative new venting feature that equalizes the air pressure between the outside world and the inside of your ear canal. So you don’t ever feel like your ears are plugged up. This new feature alongside the lightweight makes them a lot more comfortable for longer listening sessions.

Now, before we jump into the sound quality, I want to mention what comes in the boxes. They all come with replacement ear tips, but only the Sony’s WF-1000XM3 come with the full set of foam tips. But don’t worry, foams, hips are available on Amazon for both the AirPods pro and the galaxy buds plus.

The nice thing about the tips on the AirPods pro is that they come with a mesh filter on the inside, which makes sure your wax doesn’t get into the speaker grills and block sound. The galaxy buds plus also come with some replacement wingtips, which is definitely a nice bonus. They all come with charging cables in the box, but the Sony’s cable is embarrassingly short compared to the others.

Audio Quality: Galaxy Buds Plus VS Airpods Pro VS WF-1000XM3

Now getting into audio quality, the galaxy buds plus had been updated with an extra speaker, so they actually sound much better than the original buds. They have a ton of bass, almost too much at times, but it can be tuned down in the app, which is now finally available for iOS alongside Android.

We also recommend switching to the dynamic mode, which helped them beat out the AirPods pro in our hands on comparison.

The AirPods pro do sound really great. But they’re just a step down from the volume and the quality of the buds plus and the Sony’s actually sound better than the other two being the most clear, natural, and balanced with really good volume as well.

In terms of noise cancellation between the AirPods pro and the Sony’s WF-1000XM3, we definitely say that the Sony’s do a better job mostly for getting rid of low frequency noise.

Now, that doesn’t mean that the AirPods pro don’t do a great job because they really do. The WF-1000XM3 just do it a little bit better. All three of them have an ambient mode, which lets in sound from the outside world so you can hear what’s going on around you. But the galaxy buds plus don’t do a great job at this at all.

They create an unnatural sound of background noise and voices sound kind of tinny and fake. Both the Sony’s and the AirPods pro sound much more natural, but the transparency mode on the AirPods is the winner, sounding extremely close to how it sounds without having anything in your ears.

Now, before we get into which buds we would recommend. I want to go through a couple of features and software differences.

The galaxy buds have IPX67 water resistance and the AirPods pro have IPX5 while the Sony’s, on the other hand, lack any kind of official rating. The Sony’s WF-1000XM3 also requires you to download their headphone connect app to use the earbuds, which is available for both Android and iOS, and it’s packed with tons of software features and customizations.

The only issue is that the app crashed multiple times while I was using it. Well, the galaxy buds plus don’t require an app. There is one you can download to adjust ECU and controls, and it’s now available for iOS, which is great. The AirPods pro connect instantly if you have an iPhone, which also syncs to the rest of your Apple devices that are logged into your Apple ID.

However, the Airpods pro have the least amount of customization options. Fortunately, we’ve tried them on Android phones and they actually work pretty well. The major benefit of the Sony’s is that you can easily get basically any smart assistant to work like Google Assistant, Alexa and Siri.

Verdict: Galaxy Buds Plus VS Airpods Pro VS WF-1000XM3

Now let’s get into which earbuds we recommend for each use case. The Galaxy buds plus performed very well in a lot of the categories, including price, battery life and sound quality, but the ambient mode didn’t work very well, and they lack active noise cancellation. On the plus side, they’re only $143 a much better deal than the other two.

So if you don’t care about active noise cancellation. The buds plus are a great choice, but if you’re okay with spending $200 or more, we would honestly recommend Sony’s because of the decent battery life, sound quality, best-in-class noise cancellation and the fact that the Airpods pro work well on Android, not every single feature is supported.

Now for iPhone users, the choice becomes a little more difficult. If you’re someone who loves the ability to fine tune, lots of features and settings, the Airpods pro might not be great for you. But if you just want them to work great out of the box and be as convenient as possible, the extra $50 is definitely worth it.

For the AirPods pro, there’s no messing around with apps that can crash and there’s no carrying around a bulky case. They just work and they work well. And even though the active noise cancellation isn’t as good as on the Sony’s, we think it’s more than good enough for almost all situations for those that travel a lot.

The Sony’s will be a better choice because of the better noise cancellation. But if you’re not willing to spend that much on earbuds, just get the galaxy buds plus, because at that price, they’re the best value in my opinion.

So, that was our detailed Galaxy Buds Plus VS Airpods Pro VS WF-1000XM3 comparison.