Home » Apple Watch VS Garmin: Which is Better Smartwatch? 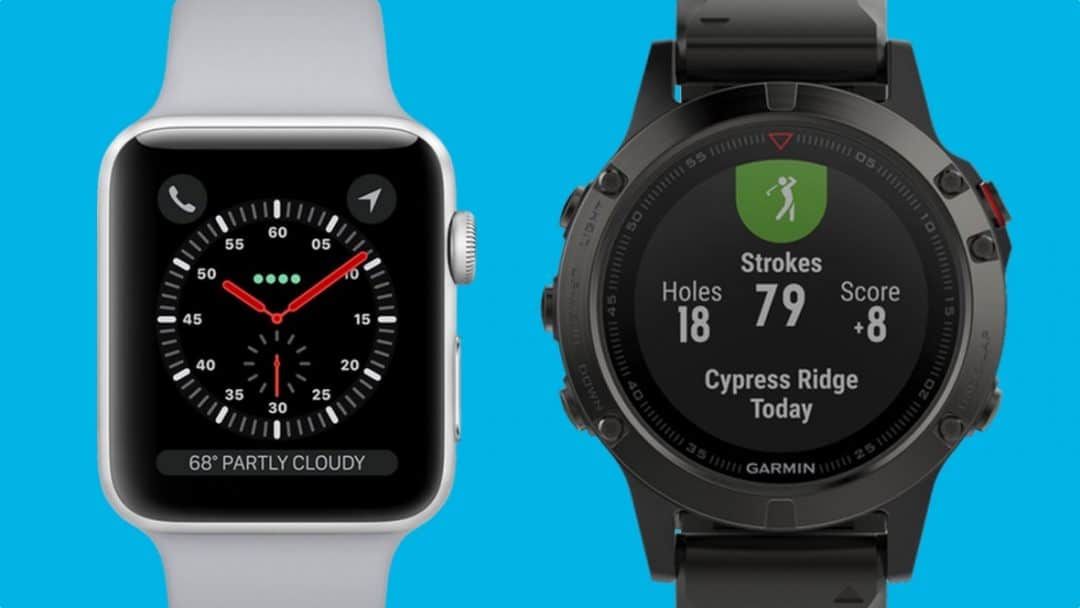 Apple Watch vs Garmin? Simple answer is that Apple watch is way more stylish and has better fitness tracking features whereas Garmin is absolutely great for mountain climbers and golfers. Both Apple watch and Garmin have distinct features and design which make them totally different smartwatches.

We’re doing a comparison article of the Apple watch vs Garmin. I’m putting Garmin watch head to head with the apple watch to see if I could personally end up using the Apple watch. I’ve tested Apple watch series 4, I’ve reviewed it but what I actually want to use it as my watch. So we’re going to do a little bit of an overview of Apple watch vs garmin.

I am gonna tell the major reasons that you’d decide yourself from Apple watch vs Garmin.

Both of them can relay incoming notifications from your phone. So if you get a text call, email, whatever, you can see that on your wrist. You can do more with the Apple watch but you can at least see and kind of interact with those notifications on the Garmin Fenix 5 watches.

Check the Price of Garmin Fenix 5 Plus on Amazon

You have music storage so you can listen to your music completely phone free. This is one of my favorite things about these watches, so you can actually store music on them, go running, go cycling, go whatever. You have your music on your wrist and you don’t have to bring your phone with you.

So a Garmin, they have a deal with Spotify, with Deezer and with iHeartRadio. The Apple watch series 4 clearly works with Apple music, and you have kind of two options there, right? You can actually transfer the music to the watch or if you get the cellular and GPS version, you can stream it assuming that you pay for a data plan.

Both of them have a native storage for music and they have an option to work out with music phone free. You have mobile payments, you’ve got Garmin pay and Apple pay. So that’s kind of just the general review of Apple watch vs Garmin. Both are sport watches. These smartwatches have activity tracking, fitness tracking, wrist heart rate monitors and all that stuff.

Reasons to Go with Garmin

I think the biggest thing in Apple watch vs Garmin is a subjective thing but it has to do with the design of the watch. So me personally, I like a round faced watch. To me, Garmin Fenix 5 Plus just looks a little bit more classic.

Overall, the Garmin Fenix 5 Plus watches whether you get the 5S Plus, the 5 Plus or the 5X Plus, they’d be rugged yet kind of refined to look to them. I think they look really nice. I think the Garmin Fenix 5S Plus looks great on young ladies wrist, women’s wrists, a guy’s wrist. So that’s a pretty versatile device.

The Fenix 5 is a little bit larger. I still think this Garmin watch looks really nice. Fenix 5X plus I think is overkill for like 99.9% of people but it still looks nice. I guess what I’m saying is Fenix 5 watches are more burly from what I’ve seen.

They’re a little bit more durable and scratch resistance kind of a hardier versatile watch. That’s not to put down the Apple watch. It’s still nice watch and a lot of people really like the way that it looks, but I personally think a lot of people will like the design of the Fenix watches.

That’s charging at one time in a week. The Apple watch is going to be maximum about two days and that is with light usage. I would say most people are going to get just shy of a day and a half of battery life. Counting the fact that you have to use proprietary charges with both of them, you’re definitely going to prefer the battery life and the performance of the Garmin Fenix 5 watches.

To me, I just find it annoying the constantly have to charge yet another device almost every single night. I like that with my Fenix 5, I’m charging it like once a week. Now, obviously that depends on usage. If I play music more, if I run more of a use GPS more for use all that stuff more, I can pull a battery life down some but it’s still going to be better than the Apple watch.

This can be anything from measuring your lactate threshold to your advanced running dynamic stats like vertical oscillations, stride length, cadence. You just get more performance stats with Garmin because it’s a performance company.

Apple gives you the baseline stats for running, like, you know, pace and speed, heart rate, your route, your distance but you get that next level of information from Garmin, which is why some people pay up for a Garmin because you know, they like the basic stuff, but they want more so me, you know, I like some of, I like in between like level one and level two, level two being like, you know, vertical oscillation and you stare at that sort of stuff.

I kinda like looking at cadence. That’s my zone. But I find that you get more performance stats with Garmin. You also have a bunch of stats that are provided by Firstbeat technologies. If you get the Garmin watch, those will be like a lactate threshold and VO2 max.

You get training effect, which in essence what it does is it takes a bunch of information most of which I believe is based on your heart rate variability. It will tell you how that workout impacted your overall fitness level. It’ll tell you if you overtrained, whether or not you improved it or you made no changes, basically got six different criteria.

Just suffice it to say that there are more performance features on Garmin. You even have things like live track and group track. I know you can get some apps on the Apple watch that do that for you but you just have all of it natively built right into the Fenix 5 watches. Speaking of native stuff, you also have native maps, so you can search maps.

All that stuff is natively built in for fitness. The Apple watch obviously has Apple maps and has other maps that you can download but for fitness specifically, it’s not quite up to what Garmin has. Most of the maps, Garmin has designed around fitness, around hiking, and that sort of thing to figure out where you are.

And I just find that the native apps work pretty well. From the fitness perspective, obviously if you want turn navigation, that sort of thing, you’re going to get the Apple watch. You’ll have a native golf app from Garmin that’s free and you can download. I think they have like 40,000 golf courses that you can choose from.

You can download those straight from the mobile app onto your watch. You get a little map, you get distance to the front, the middle, and the back of the green. You get yardage information, you get digital scorecard, and you get more from Garmin. You can download golf apps from the Apple watch.

Let me just shoot you straight. Most of those are a scam. Most of them tell you they’re free, they have in-app purchases, you know, you really can’t get anything useful unless you pay for them. And I like the Garmin golf system a lot better.

There are fitness tracking and sleep tracking. I think the fitness tracking for Apple is just fine and most people will love it but Garmin goes a little bit further given that it has better battery life and it will track your sleep every single night.

Most people probably don’t care about that but if you just kind of want to get a barometer of how you’re going to feel the next day, look at the mobile app, and then you can see how well you did in terms of sleep quality, how much time you spent in REM sleep. And so I like the fact that it tracks your sleep and the Apple watch kind of doesn’t.

You can get some apps but Apple watch really doesn’t have that. So that’s the Garmin Fenix 5 plus watches. You can tell that most of the stuff is performance. It’s outdoor stuff. It’s burliness. It’s a performance watch.

Apple watch takes the lead in Apple watch vs Garmin comparison in some areas. Apple watch is a smartwatch so that’s its biggest advantage. It’s better on all of the smartwatch capabilities. It has Siri. You can reply to messages. You have the option to get a cellular version to get your calls and messages on the go and stream music on the go. You have many, many, many more apps to download within the watch IOS app store even though most of them kind of suck.

There’s just no big ecosystem for Garmin. You have some third party bands. Most of them suck. You have Garmin that produces bands and they’re expensive so you just get more with the Apple watch. You can go on Amazon you can buy pretty much anything you want for this watch. You can buy different different sport bands.

So you know, if you care about that sort of stuff, you’re obviously going to get the Apple watch because Garmin just isn’t really filled out in that arena. So that’s our review of Apple watch vs Garmin.

What do you care most about? So write me down below in the comments. Let me know what you think about Apple watch vs Garmin review.