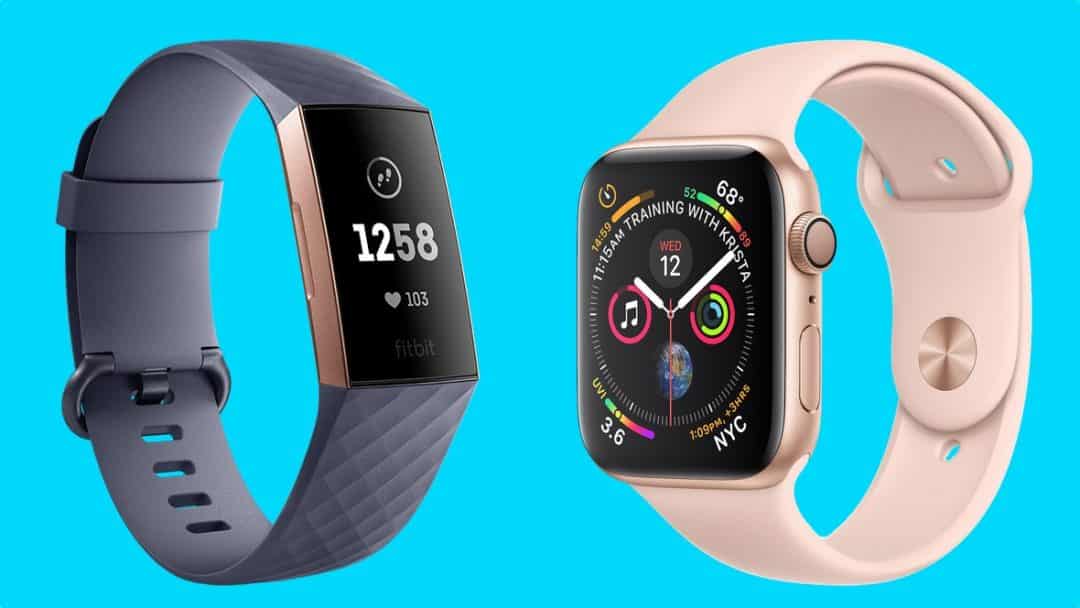 So obviously there are a lot of details that we’re going to touch in this article.

We’re just going to go over the major reasons why you’d get the Charge 4 over the Apple Watch Series 5 and vice versa.

Do the math. It’s a lot more affordable. You’re obviously going to get the Fitbit Charge 4 if price is the biggest thing for you.

Now, the second thing is probably battery life. So a battery life is about six to seven days, right in that range on a single charge for the Charge 4, and then it’s about one to two days, maybe 30, 36 hours for the Apple watch serie 5. So if you travel a lot, or if you just are a power user of the device, you’re going to want the one that has better battery life. And that’s the Charge 4.

The next thing is just the size of it. So you’re getting a fitness wristband or like a bracelet style device versus a proper watch. So let’s say that you don’t want to kind of show off that you have a fitness device or a tech gadget.

You can disguise it a little bit more with the Fitbit Charge 4 because it’s sleeker, it’s smaller and it’s better for somebody in like an office environment where you don’t want to tell everybody that you’re using a tech or fitness items.

So some people might like the size of it. I also prefer Fitbit Charge 4 for working out because it’s smaller. It’s easier to hike up your wrist to get more accurate heart rate readings. And it just kind of feels sportier. So to me, just the design of it makes it better for working out.

And the last thing has to do with fitness and sleep tracking.

But I think Fitbit Charge 4 is going to get the edge in terms of fitness tracking and overall health tracking because that’s Fitbit’s bread and butter. I mean I’ve been doing reviews on Fitbit since 2013 and they’re really good at it. They’ve had a lot of time to perfect this. So they do a great job of fitness tracking and tracking your steps, calories burn, distance, heart rate, all of that to do a great job of sleep tracking.

So there’s a lot in that Fitbit app, and I think just overall Fitbit is the better kind of fitness tracking company. So that’s really it for the charge 4. I do think it’s a really nice device and it will be crazy popular.

I mean, it’s an Apple product, so a lot of people were going to get it, and in my opinion, it’s the best Apple watch yet. I mean, that probably comes as no surprise to you, but it’s faster. It’s snappier. As a larger display, just kind of feels premium. So it’s definitely getting a lot of people that don’t end up getting this device.

So obviously I said before, price starts at 400 goes up from there. So it’s actually pretty expensive, but the main reasons that you would get the Apple watch for are just a bundle of features. It’s a smartwatch, it’s a proper smart launch with like fitness stuff added on. So it does a great job with all the smartwatch stuff.

It has Siri which actually is pretty convenient. You can get the cellular option and take and make calls and get messages and all that stuff on the go completely filled and free. If you don’t get the cellular version, then you still get all of that stuff. You just have to have your phone pretty close to you.

Apple Watch Series 5 also has Wi-Fi. You can download all these different applications, I mean, dozens and dozens of apps, if you care about that. It also does a better job with relaying your notifications and watch faces at widgets and all that stuff. So let’s say you get a call or you get a message or an email or something, the, everything’s more interactive on your wrist.

Calling notification symbol works well on the Charge 4 but you get a lot more of the smart stuff with the Apple watch 5 so that’s the first thing. That’s the biggest thing.

The second thing is it’s a better sport watch. So Apple Watch Series 5 actually has a GPS chip whereas the Fitbit Charge 4 has connected GPS. I’ve talked about this so many times but what it does is it basically pairs with your phone when you go running, and it uses the GPS signal from phones, so it doesn’t technically have GPS.

Fitbit Charge 4 hops on top of the GPS from your phone. So you have connected GPS with the Charge 4, but you have it natively built into the Apple watch 5. So that’s the reason I call it a better sport watch. On top of that, it can track all the activities just like Fitbit Charge 4.

So everything like cardio, yoga, running, all of that. But one thing that has that the charge 4 doesn’t, is it can track outdoor or open water swimming. Both of them can monitor pool swimming. And I’ve tested them both. They’re built accurate, they both do a really good job of tracking swimming. But outdoor swimming, you’re only going to get that on the Apple watch 5 and not on the Charge 4 device.

You have no music storage feature on the Charge 4. So if you want to take your music on the go with you to work out or to run or to bike or something and you don’t want your phone with you, then you’re probably going to get the Apple watch 5. It’s just better in that regard.

Apple Watch Series 5 has more features. So for me, it really comes down to price versus capabilities. You’re going to get the Fitbit Charge 4, if you want just a solid activity tracker, like a really good device and it’s more affordable.

You’re gonna get the Apple watch if you really want a smartwatch, a sport watch, and you like some of the stuff I talked about before, I can tell you right now that I think a lot of people will really like the Apple watch series 5.

Again, it’s the best Apple watch yet, but I think people start to get bored with it over time. Like there are only so many good applications. The best thing really is the design, the screen, the notifications, and Apple music and the sports features. A lot of those third party apps, they’re just not that helpful.

I hope you would have made up your mind regarding Apple Watch Series 5 VS Fitbit Charge 4 by now.